A Lady who worried and fretted too much about the little things of life,

and who was on the verge of a nervous breakdown, came to her physician for help.

She told the doctor how nervous she was, how little things worried her, how things which she had

counted as trifles a few years ago now seemed so important and got on her nerves.

"I am cross and irritable, Doctor," she said. "I can't be decent to my own family. I say unkind words.

I get hysterical. I cry about nothing. My nerves are on edge all the time. What can I do?"

The doctor listened quietly and sympathetically while she told her symptoms, and asked her a few questions.

Then, much to her astonishment, he said, "Mrs. Cooper, what you need is to read your Bible more."

The lady was surprised. And it was not difficult for the doctor to see that she felt just a bit hurt.

wrong with her physically didn't make her feel any too kindly toward him.

Thinking that she had not made herself understood, she made another attempt to tell the

doctor her symptoms. He stopped her and said: "Mrs. Cooper, you go home and read your Bible

for at least one hour a day for a month. At the end of thirty days come back and see me again.

Be sure to follow my advice carefully. I will be glad to see you at the end of the month. Good morning." 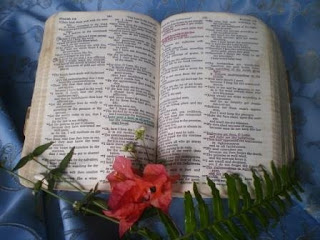 Mrs. Cooper was inclined to be a bit upset. At first she thought she would see another doctor,

one who might be more understanding and sympathetic. But as she thought about the doctor's advice,

she concluded that it was not an expensive prescription anyway. And it was true that she had not

opened her Bible in many, many months. She had a copy of the Book some place at home,

but it had not been read for a long time. "I'll try his prescription," she said to herself.

So this Christian woman, a church member, went home determined to read the Bible

at least an hour a day. She was faithful in following the doctor's orders, and at the end of the month

went to see him again. With a broad smile on his face he welcomed her, saying: "Well, Mrs. Cooper,

you have followed my prescription, I see. And you are feeling better, aren't you?

You don't want any medicine, do you?"

"No,Doctor," she replied, "I don't need any medicine; I feel like a different person.

The world looks different to me. I am much happier, and my family is happier too.

I am ashamed that I neglected the Bible as I did."

Turning to his desk the doctor picked up a well worn Bible. "I read it every day," he said.

"If I did not, I would lose my greatest source of strength and skill. It provides help for

difficult cases. I never go to an operation without reading something from this Book.

I cannot tell you what help it has brought to me, and I felt you did not need medicine,

but the peace and comfort which can be found in the Bible."

"To tell you the truth, Doctor, I came very near not taking your prescription," said the lady.

"Many people have refused to take it," he replied. "It is so simple, they have no faith in it."

Strange, isn't it, that a doctor would give such a prescription! But this is a true story,

and no doubt many others would profit by it. The Bible does change hearts.

I read, enjoy and learn from your blog. Thanks! Keep on posting.

Online Bible for your reference

May the road rise up to meet you.
May the wind be always at your back.
May the sun shine warm upon your face;
the rains fall soft upon your fields and until we meet again,
may God hold you in the palm of His hand.