The only man who refused to carry a gun 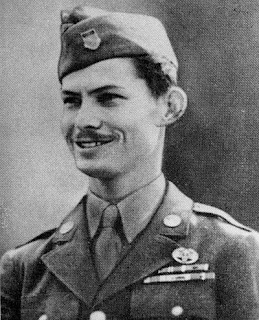 
Desmond T. Doss - I think that he is the bravest army person ever. Because he refused to carry a gun, everyone said that he would die in the army. But he didn't die, he lived. Some people died from dehydration during the war and Desmond took care of most of the people who were about to die.
When Desmond was a boy he loved the Ten Commandments. He studied them and he became a Seventh Day Adventist. The day Desmond would always remember is when his father and brother got into a fight. The father pulled out a gun after awhile, then Desmond's mother got in between. Desmond's father didn't want to hurt her. She said you give me that gun, the police are on the way. When Desmond's father gave it to her she told Desmond to hide it. Desmond got there just in time to see his father go into the police car. That day Desmond said that he would never use a gun for as long as he lived.

Desmond got older. When World War 2 came, he wanted to be in the army as a medic for his country. He passed the test, but then he said that he could not use a gun. The army said that if he would not carry a gun, he would have to go to a camp that did not want to fight for their country. Desmond didn't want to, but he went there for a month. He complained to the army, so they let him in. They assigned him to Fort Pickett in Virginia. They put him in the worst place they could. They put him in a rifle company where they had to carry a gun. But it didn't work, so they sent him somewhere else.

Doss receiving the Medal of Honor from President Truman

After Desmond T. Doss was done at Fort Pickett, he was assigned to a division - the 77th division. They soon went to Guam. A fierce battle took place against the Japanese. They fought and the Japanese sometimes picked off medics. A lot of medics died, but Desmond Doss was different than the others. He kept on healing while some of the medics were dying. One day the army said that the 77th division would go to Okinawa for the bloodiest battle ever. In Okinawa, they went up to the tope of the cliff they were battling over. The Japanese opened fire with everything they had. Then everyone went up and about 25 people went back. 75 people were still at the top so Desmond made a knot and ran and tied them to the rope and they went down the cliff with Desmond on the rope so they wouldn't fall.
He saved all 75 people with the rope, dead or alive. When Desmond finished they thanked him and then he got hit. They gave him the Medal of Honor and sent him home to his wife. 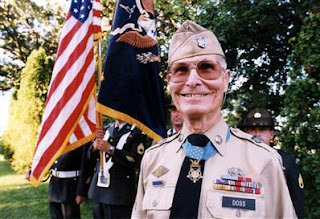 
Desmond lost almost all of his hearing from the army pills they gave him. Desmond died about 1 year ago and I still think he is my hero.

Written by KC from Elkins

( I don't know when KC from Elkins wrote this, This email was forwarded)

Labels: The only man who refused to carry a gun

Online Bible for your reference

May the road rise up to meet you.
May the wind be always at your back.
May the sun shine warm upon your face;
the rains fall soft upon your fields and until we meet again,
may God hold you in the palm of His hand.